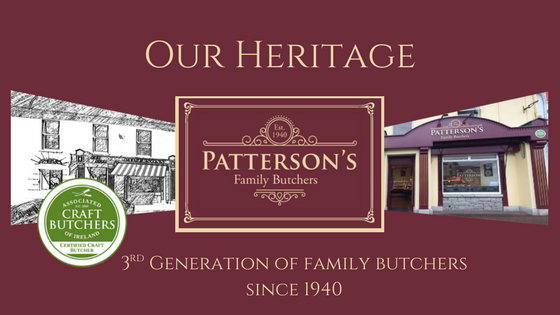 We are proud of the Patterson’s Butchers Heritage and would like to share our story with you.

Michael Patterson arrived in Baltinglass by train from Naas in the late 1920s. He had lived on Main Street, Naas while working as a butcher on Murtagh’s Corner.

When he moved to Baltinglass, Michael worked in both Mick Timmins and Ben Farrell’s butcher shops. At that time in Baltinglass, there were 5 butchers shops to choose from. In 1940 Michael took the brave step of opening his own shop which was on the main street Baltinglass where the current shop still stands.

The slaughter house was located at the back of the shop and the cattle and sheep were walked up through the archway to it. Michael would travel the whole way to Dublin twice a week in those days to buy produce. He would wholesale buy Wicklow lamb and rabbits at Tommy Clyne’s shop in Parnell street.

Wednesday was the traditional ‘Half Day’ in Baltinglass, while Fair Day was on a Monday which would attract large crowds. Other popular days were the pig sale on a Tuesday and the Arklow Herrings and Fowl day on Friday. The turkey market at Christmas was a great event that generated some excitement each year.

When Michael died in 1958, his two sons Michael and Denis took over the shop and continued to run it for many years. Today the business continues in the family with the third generation of Patterson’s.

The business has seen many changes over the years from open windows to the introduction of fridges and the replacement of the butchers block with the modern counter. While much has changed over the years our ethos has remained the same.

Patterson’s over the generations have always stayed loyal to local farms. These farmers have produced top quality beef and lamb for the shop. The customer is assured that the farm to fork ethos has not changed for Patterson’s butchers. Derek and Damian Patterson are the third generation running the business today and remain extremely proud of the generations that went before them.

Patterson's Butchers are a Certified Craft Butchers located in Baltinglass, Co. Wicklow.  Established in 1940 we are proud of our heritage.  We have full traceability of  product which enables us to offer the highest quality meat and fish to our customers.